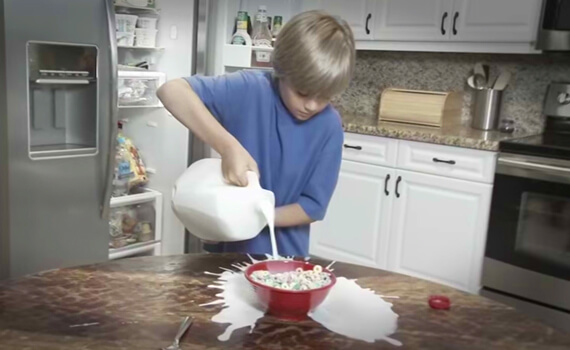 The Power of Spilled Milk

Just another…yawn!…ordinary day: wake up, dress, pour a gallon of milk near your cereal bowl and watch it cascade over the breakfast table. Does this remind you of your ordinary morning? I doubt it (and if so you should be reading this instead).

We all have awkward moments but usually when we drop a bowl of cheesy puffs it doesn’t elicit the epic flail of DRTV. So what is it about presenting this unreal, over-the-top mistake that makes it so massively effective? What is so universally captivating, engaging, and dare I say it, significant about the Epic Flail?

It’s been said that the first order of business for great DRTV is to “grab attention.” In fact, researchers say that when it comes to attention grabbing, the first five seconds of a commercial are literally all that count.

“Commercial attention does not build. Your audience can only become less interested, never more. The level you reach in the first 5 seconds is the highest you will get, so don’t save your punches.” –How to Advertise (Kenneth Roman and Jane Maas)

So that first five better be good, not just good-information-good, I’m talking about 5 seconds of neuro-rocket explosions in the viewer’s brain.

In the early 1990s neurobiologists discovered something interesting about how the brain works when it’s observing. When someone drops a bowl of cheesy puffs and subsequently thrashes about as they try to catch it midair, neurons that control these movements are popping like fireworks.

“But when we observe another person bumbling, some of our own neurons fire as if we were the person doing the flailing — these mirror neurons are duplicating the patterns of activity in the flailing person’s brain. The observer’s brain is “tickled” by that neurological “ghost.” [source: Fry]

It’s funny (which is excellent) but even more importantly, the observer experiences an unconscious stimulation. The brain is engaged, and an engaged mind is paying attention.

“Remember, people are engaged in all sorts of activities besides watching TV. and even if they’re watching, they might not really be paying attention. TV watching can be a very passive activity. So you have to break through the fog and grab your viewer.” [source: Miller]

Recently, I watched The Bill Murray Stories, a documentary of spontaneous encounters with the elusive, comedic veteran, who “touches lives by simply showing up anywhere.” Within the context of “ordinary life” Bill Murray shows up, washes dishes or eats lasagna or bartends or plays some kickball and then leaves, having left an indelible mark on the memories of everyone there.

Bill Murray is a living embodiment of practiced incongruity. He creates happenings that are out of place, incongruous, not in accordance with the way things are supposed to go. The documentary posits that he does it to “wake people up.”

Likewise, an epic mistake is incongruous: the action is not in accordance with the way things are supposed to go. The Epic Flail is a wake up call, an attention grabber, a pattern disruptor. The milk is supposed to go into the bowl, but it didn’t: it went everywhere! It seems so simple, and it is. Something is off, and we notice.

DRTV: There’s Method in the Madness

How to Wake Up through Play (& the Wisdom of Bill Murray)

Ask the Brains: Why do we Laugh?

Pain & Pleasure: Why it’s Funny When We See Someone Falling Down

26 Infomercial Fails Guaranteed to make you Laugh Every Time